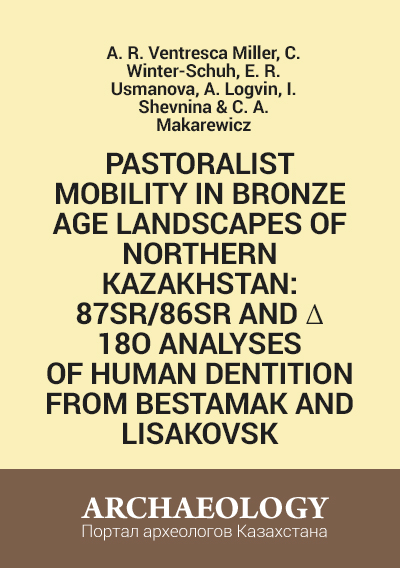 ABSTRACT
The role of migration and mobility of people across the steppe has often been cited as key to Bronze Age developments across Eurasia, including the emergence of complex societies in the steppe and the spread of material culture. The central Eurasian steppe (CES) is a focal point for the investigation of the shifting nature of pastoral societies because of the clear transition in archaeological patterning that occurred from the Middle (MBA) to Late Bronze Age (LBA). The spread of LBA (1700–1400 cal BC) Andronovo cultural materials found across wide swaths of the steppe provide indirect evidence for broad scale interactions, but the degree to which people moved across the landscape remains poorly understood. This study takes a first step into documenting human movement during these critical periods through strontium (87Sr/86Sr) and oxygen (δ18O) isotopic analyses of tooth enamel recovered from human individuals buried in the cemeteries of Bestamak (MBA) and Lisakovsk (LBA) in northern Kazakhstan. Strontium isotope results, referenced against the distribution of contemporary bioavailable strontium in the vicinity of both sites, suggest local communities engaged in small-scale mobility with limited ranges. Reduced strontium and oxygen isotopic variation visible in humans from Lisakovsk suggests mobility decreased from the Middle to Late Bronze Age likely indicative of a shift in resource and landscape use over time.