Offerings of Hunnic-type Artifacts in Stone Enclosures at Altynkazgan, the Eastern Caspian Region 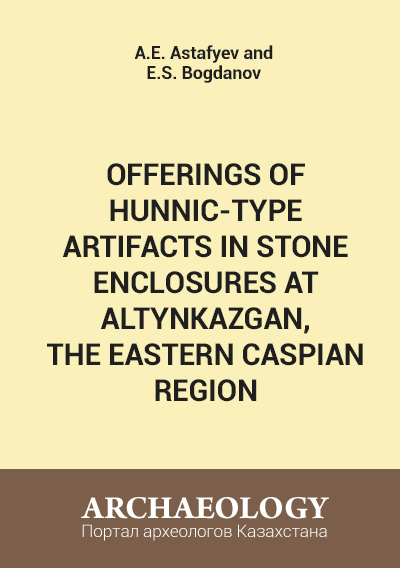 In 2014–2016, nine enclosures built of stone slabs were excavated at Altynkazgan, on the Mangyshlak Peninsula,Republic of Kazakhstan. Inside them, remains of offering ceremonies were found: vessels dug into the ground, altars made of limestone blocks, and pits for offerings. In one of these, we found a richly decorated bridle, in another, a belt set of inlaid golden plaques, and in the third, remains of a saddle (silver plates and other items). The entire Altynkazgan assemblage has numerous parallels among 5th and 6th century fi nds from the northern Black Sea area, North Caucasus, and Volga basin. Ritual burial of the “golden” belt, bridle, and ceremonial saddle indicate an advanced cult that included offerings of prestigious belongings of horsemen. These rituals were introduced by Iranian-speaking nomads who migrated to the eastern Caspian region during the Hunnic raids to Iran in the 5th century. At that time, owing to the regressive phase of the Caspian Sea, the semi-desert northern Caspian coast was connected with Mangyshlak by a land bridge. Our hypotheses are supported by both historical records and modern geomorphological studies of the Caspian Sea.
Keywords: Mangyshlak, Caspian Sea, Huns, ritual burial objects, Atharvaveda.